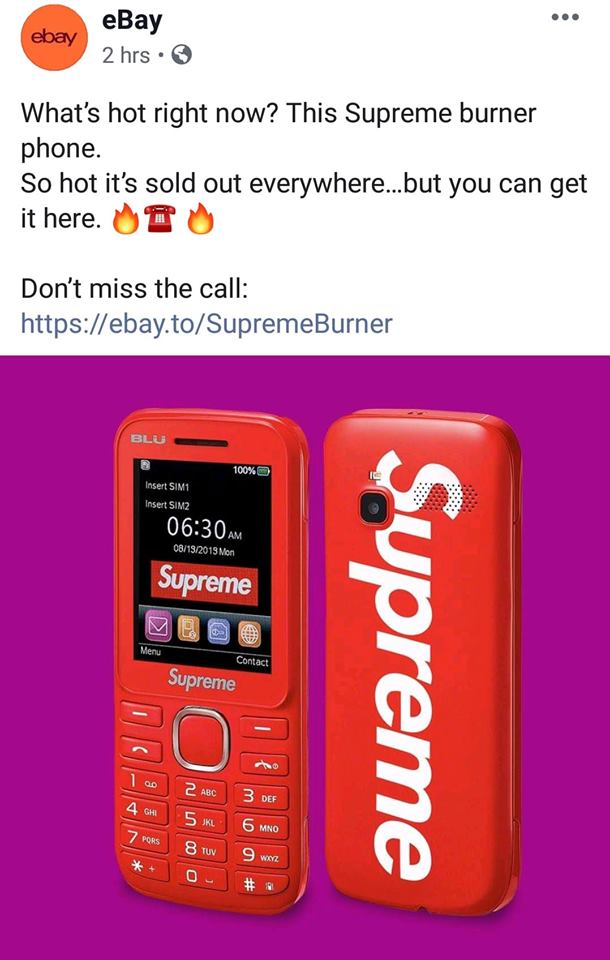 eBay recently said that they were ditching search such as Google in favor of “Social Media”.

I seriously hope that this is not their solution to selling things. And I hope that they actually understand that burner phones are not a good thing.

First, my apologies for just letting this blog go dormant with any warning.

As mentioned in our last post, eBay is Dead. Long live eBay!, our eBay sales took a nosedive in February. I had hoped that things would pick back up at some point, but it has actually gotten WORSE! Last week we only sold 3 items on eBay. THREE! This is Q4, right?!

Since the last time I’ve blogged here, we’ve been hitting Poshmark pretty hard and we’ve added a handful of items to Etsy. We removed almost all of our Mercari items and will revisit that at some point down the road. And Amazon is still being pondered but isn’t in the cards right now…it’s Q4, which is no time to be messing around (someone please tell that to eBay).

In my frustration with eBay underperforming, I finally broke down and got ahold of them to look over our main eBay store. And here’s the takeaway from that evaluation.

Typically we have a few things we can suggest folks to help improve their business, but it’s more than apparent you work hard to optimize your listings and account. We hope things turn around soon!

It was at that point that the new game plan that I was already working on became our number one focus.

As a programmer, my inclination is to “roll my own” as much as possible. There’s no sense in paying for things that I can easily do myself. So when it has come down to shopping carts over the past 20+ years I have always used open-source packages. But with that comes a much bigger time commitment. And time is at a premium these days.

That said, over the summer I began devising a plan to incorporate Shopify into blogs. Similar to what we did with e-junkie (a Javascript embeddable shopping cart) years ago. The gist is that you post an item and embed a purchase link so it could be purchased right there without even leaving the blog post. I’ll add some of these in future posts here so you can see what I’m talking about.

As I got more into what Shopify was capable of, everything started clicking. With this one powerful tool we could sell things anywhere we wanted to, including in person, and it only cost $29 a month. Sign us up!

With the switch to Shopify, we imported all 3 of our eBay stores into Shopify as well as our old shopping cart. Then we closed 2 eBay stores and switched our other eBay store to a monthly Premium (1,000 items level) store.

The cool thing with Shopify is that eBay (currently) integrates with Shopify. We can push any listings we wish from Shopify to eBay with a few clicks. AND all of our customer information gets stored in Shopify. One place to control them both.

After Q4 the plan right now is to downgrade the remaining store to a monthly Starter (100 items level) or Basic (250 items level) store. Until eBay starts selling things again, there’s no point in curating thousands of items there.  We’re a business, not a museum nor a warehouse.

Over the coming weeks we’ll be rolling out a lot of new features, so stay tuned, and please sign up for updates.

Signup for news and special offers!

Nothing Sold On eBay

I should be happy that it was my first eBay goose egg of the month since we had a record NINE non-sales days in March. A typical non-Q4 month sees 2-3 days without a sale on eBay, so that’s not a big deal. But sales this week, in general, are a little worrisome.

But this week I decided to bump things up a bit to see if we could get a little more traction.

Monday-Wednesday, our best sales days of the week in 2019, I set Promoted Listings at the Trending rate + 2%. We had 6 sales over those 3 days, two (33%) of which were via promoted.

For reference, last week, which was a somewhat slow week, we had 11 sales Monday-Wednesday. Three (27%) of those sales were via Promoted Listings at a flat 1% rate across the board.

On Thursday I decided to try Trending +3% to see if we could do a little better than that. While impressions & clicks were up slightly, this did not result in any sales, promoted or otherwise.

This morning I put things back at a flat 1%.

I know that this is a very small sample size and is somewhat comparing apples to oranges, but that doesn’t meet my expectations. If those extra impressions are simply extra irrelevant impressions they do no good at all.

I don’t have an issue with Promoted Listings in principle. It’s a marketing expense and if you have a product going after the same buyer, it’s a great idea. You wouldn’t think of leasing a storefront and not advertise to get people into your store.

But I have issues with the way it has rendered search pretty much useless. eBay search is so bad to the point that I actually search for eBay items in Google in order to purchases things that I want to buy. It’s a wonder that any of us selling anything through eBay searches.

I was having one of those days where everything I did seemed to be in slow motion and the timeline was in fast forward. That’s a very unproductive combination, so I wasn’t able to knock out the last 24 listings for Fazoom.com.

I’ll get those items knocked out this morning and will be cross-posting to Poshmark, so I should hit 300+ listings completed this week.

Welcome to Duckk, a simple blog about reselling by a reseller.

Topics will touch on anything related to reselling and will include regular features such as what I’m picking, what I’m listing and what I’m actually selling.

As we begin this journey please introduce yourselves in the comments below.