These eyeglasses were picked up in an auction lot last year and listed in December 2018.

While I don’t seek out most eyeglasses if I spot ones that are in decent condition and at a reasonable price I will pick them up. And obviously, certain designers and styles sell better, so be sure to look up similar solds when pricing. 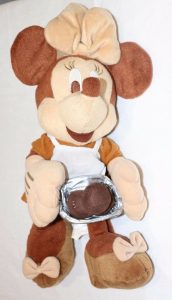 2. I sold a Minnie Mouse Plush Doll via Best Offer and Promoted Listings at 1%.

This doll was picked up at a thrift store in 2017 and listed in November 2017. I really don’t want to hold onto plush this long as they do take up a lot of valuable storage space. 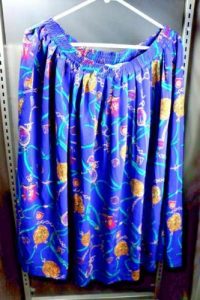 This skirt was picked up at a thrift store in 2017 and listed in August 2017. Again, not something I want to be sitting on for that long. 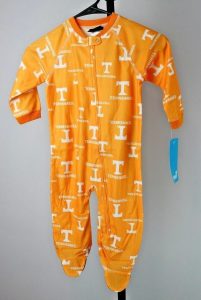 4. I sold Tennessee Volunteers Infant Sleepwear at full price through Promoted Listings at 1%.

This was part of our bulk new clothing purchases last year and was listed in August 2018. Yet another slow clothing sale. But it sold!

When it comes to new vs. preowned clothing sales & pricing, being new vs. used doesn’t seem to matter a whole lot on eBay for lower-end items. All people are looking for is a bargain. “Fleabay” as some refer to it.

I usually sell a “run of the mill” graphic t-shirt for around the same price point regardless if it’s new or preowned. With new items, on occasion, you’ll get someone who pays the retail prices Amazon gets for the exact same item, but in my experience, those are few and far between and usually through the use of Promoted Listings.

I’ve had a similar experience with higher-end clothing as well, but I do see those going for the full asking price more frequently than our lower-end items. But on eBay, you always have to field questions about authenticity and then worry about false counterfeit claims. Unfortunately, that’s part of the game. Higher risk, higher reward.

Bottom line, if the item itself is something that people are after, it will sell. But personally, if I’m going to sell lower-end clothing, I’d much rather buy new items to resell in hopes of avoiding some of the return headaches based on item condition. It’s far too easy to miss a stain or snag on a clothing item no matter how much you look the item over. And frankly, I’d rather spend the flaw investigation time listing things instead.

On Tuesday, April 2, 2019, I sold two items on eBay. Both graphic t-shirts that have been listed for ages. 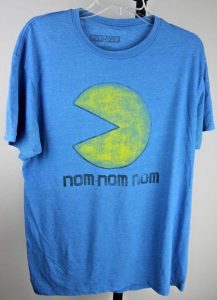 1. I sold a Pac-Man Graphic T-Shirt via Best Offer.

This was picked up at a thrift store well over a year ago and listed in June 2018. 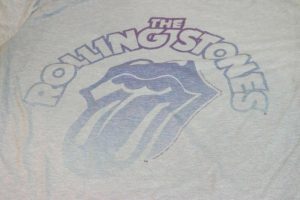 2. I sold a Rolling Stones Graphic T-Shirt at full price via a 1% Promoted Listing.

This was picked up at a thrift store in the fall of 2017 and had been listed since November 2017.

I’ve stated before that I don’t like selling most clothing, but I don’t mind selling t-shirts. But the online clothing market is extremely saturated and I’m not really interested in sitting on t-shirts for a year or more. You’d probably need to have thousands of t-shirts listed at any given time to really make a go at it. And that’s a lot of storage space that most of us probably don’t have. You’d need to commit to it and have some help with it too. 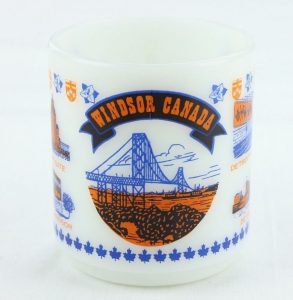 This was picked up at a thrift store and listed in May 2018.

While mugs like this sell, expect them to be a long tail item. Milk glass just isn’t as hot as it used to be.

The first quarter is now behind us and looking at the numbers things aren’t headed in the right direction over at eBay.

Same quarter sales were down 6.7% over 2018. While that may not sound like a lot you have to take into consideration that we have 4 times the inventory listed this year on eBay and are selling through seven different platforms this year, many items cross-posted.

Last year we were only selling on eBay in Q1. Sales numbers this year also include sales through those 6 other platforms, so those numbers actually inflate the sales numbers above what eBay is doing.

February & March sales combined to equal January sales. And that’s a problem since you usually see “Taxmas” season sales in February & March and those months normally do better than January does.

Is eBay on the Downslide?

The takeaway from all of that is that eBay appears to be on a downslide for some of the types of items that we sell.

As seen in my What Sold posts we sell a wide variety of items on eBay.

Clothing currently accounts for around 1/3 of our listings but typically sells less frequently than that.

Hats, mugs & other glassware & kitchen gadgets account for another 1/3 of our listings and those categories are selling at or slightly below that rate.

Then the last 1/3 is a hodgepodge of antiques, vintage, jewelry, collectibles and other random things that I come across. These are the items that sell the most frequently for us on eBay and are going to move into the 50-60% range of our eBay inventory in the coming months.

That said, unless something changes at eBay soon, I think the solution for us right now is to go after things that are interesting and have less competition, or better yet, no competition. The bulk of the clothing has to go this year, which includes adding another platform to the mix, Poshmark. Wish me luck. 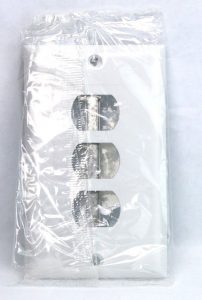 This is a rather odd and boring item that I picked up back in 2017 in a large clearance lot at the local hardware store. These tiny switches are found mainly in older homes. Talking to my uncle who is an electrician, he said he had never seen a plastic one before and that you’d really want a metal wall plate to go with that sort of thing to fit the style. My best guess would be people remodeling older homes and going with a modern day look instead of historical. Or maybe they couldn’t find a metal one.

This is a perfect example of the type of “smalls” that I like to sell. List once and sell many over a few years. But it’s also something I wouldn’t recommend specializing in or buying by the gross. There’s a reason the hardware store got rid of them. 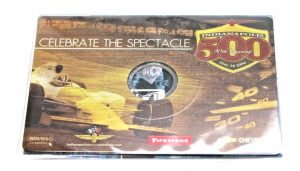 Anything Indy 500 related is of personal interest and in my wheelhouse. And it’s readily available everywhere around Central Indiana. This particular item was picked up recently in an auction lot of costume jewelry and is the entire reason I went after this particular lot. There was a handful of these in there and they should start selling in April and May as we get closer to race time.

As far as CD Cardz goes, I couldn’t find a whole lot of information and no exact comp. Comps for other ones were all over the board, so I listed high and added Best Offer to the listing. 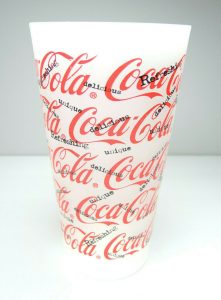 1 & 2. I sold two Coca-Cola Coke Thermo-Serv Plastic Drinking Tumblers at full price to the same buyer with a 1% promoted listing.

I picked up six of these in an auction box lot a few weeks ago and now have 3 left.

I’m actually a little surprised to see these go so quickly, but I’m not going to complain! 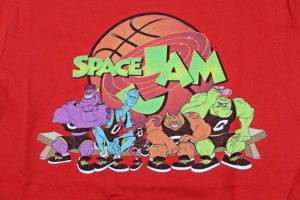 These were part of a bulk buy in 2018 and are among the clothing items that we’re clearing out. I have a number of these left in various sizes.

What Sold At The Antique Mall 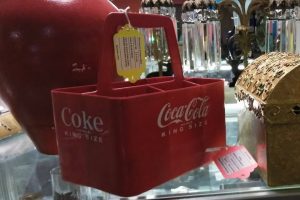 I picked two of these up at a yard sale some years back for myself but decided to sell them. 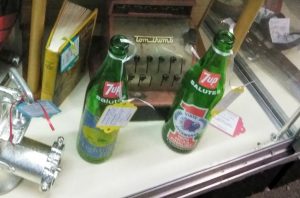 2. I sold an Indiana State University 1979 Basketball 7-Up Bottle.

I picked this out of a dumpster and run across these frequently. Nobody seems to want them, but they’re good cheap filler to go towards our monthly rental fee. I have more ready to take its place.

3. I sold a Notre Dame Fighting Irish 7-Up Bottle.

I picked this out of the same dumpster. This one is a little harder to come by, but they’re still readily available around Indiana. I also have at least one more of these on hand.